tHe VoYAGe oF tHe GoNGooZleR

Its brave crew, the troubador-balladeers of Janus Sonic Travels have chronicled the strange and wonderful things they found along the way.

Hark to the sound of the records they made, and read more about the stories they uncovered below…

Witness the fair ship herself docked in Coventry Canal Basin from 11th-14th November in the Earth Year 2021 as part of the wondrous Random String Festival.

FIND OUT MORE at RandomString.co 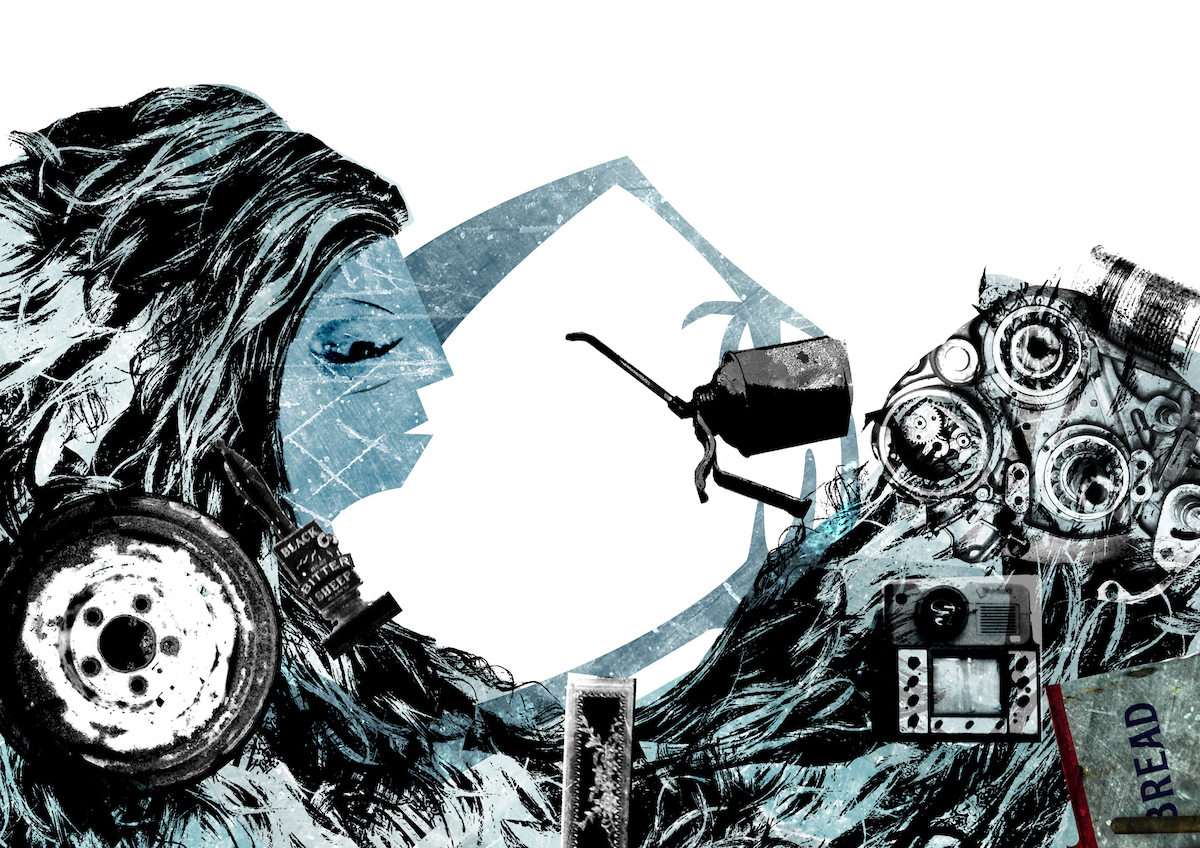 CISSA is a goddess who picks up discarded objects from the canal in her net, in an act of harmless theft, or gentle hoarding. These items contain souls which were distributed by THE CARRIERS but were left unwanted, and must be returned to the Other Place to be redistributed. Cissa is permitted to keep the shells of the souls (the rubbish) as payment. Sometimes sailors get caught in her net and are transported to her treasure trove of rubbish.

Her three daughters are different elements of the water, and each has a finely balanced role in maintaining the equilibrium of the canal system. PUDDLE is responsible for plugging leaks in the canal with clay, SINK is responsible for drainage, and LOCK keeps the currents in check and tides at bay. Her daughters are joint mothers of NIKOLA who guards The Carriers’ Bridge, the connecting point of The Here and The Other Place.

If you are caught in Cissa’s net and sent to her hoard, you will need to find your way to the bridge through the rubbish dunes that have been forming for over a century, whereupon you will meet the Carriers and try to persuade them to take you back to The Here.  If you fail to persuade them you will be left to roam the rubbish piles of Cissa for eternity. 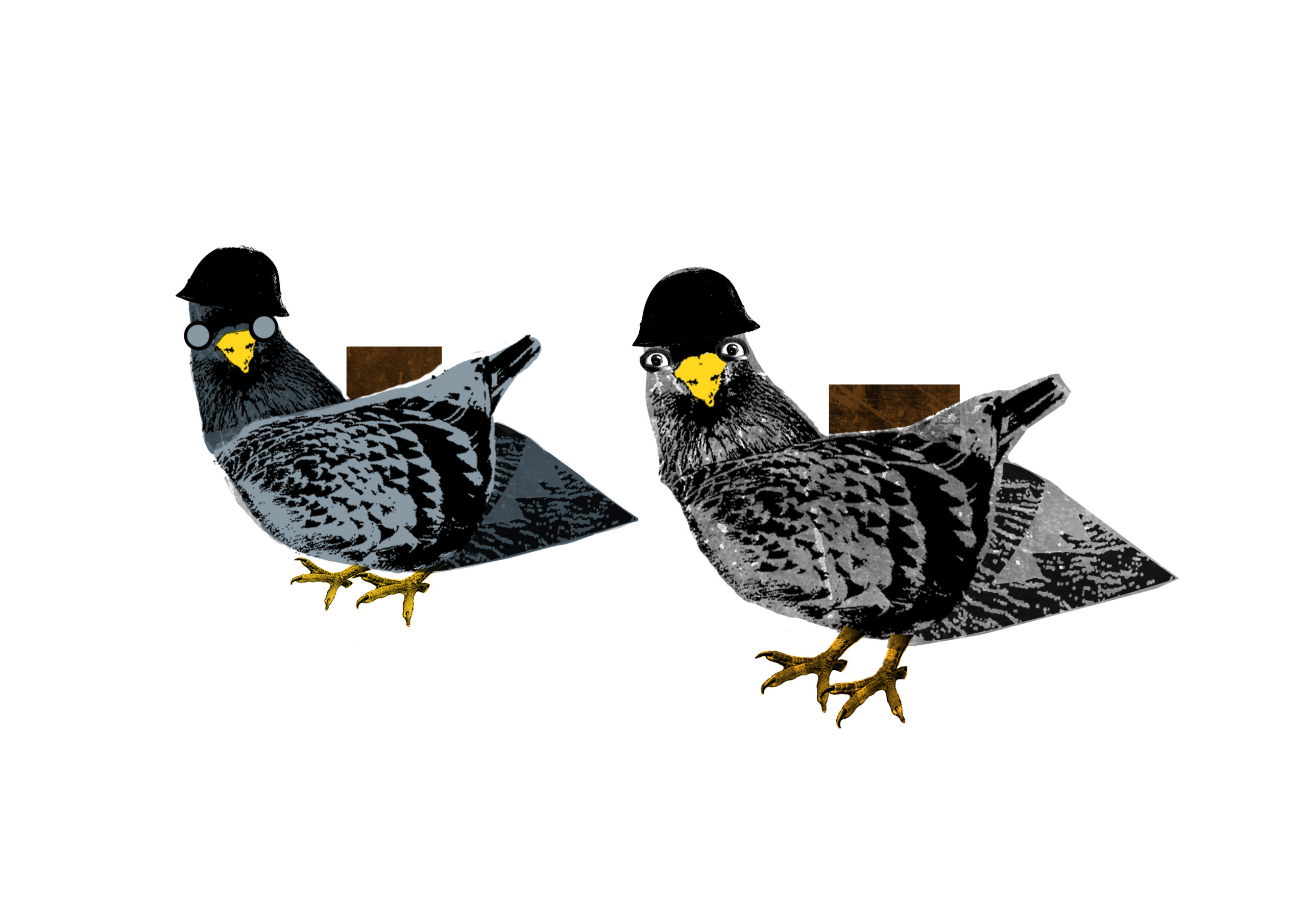 Based at the bridge between The Other Place and The Here, THE CARRIERS are bird-gods who ferry the souls of various beings between the two. If you look closely, you can see spirits trying to pass on the walls of the bridge, flickering and bumping into each other.  Only when the sun reaches a certain point to form a perfect triangle on the wall (their favourite shape, like magpies like silver, Carriers like triangles) will souls be allowed to pass.

Once they have carried fresh spirits to The Other Place, they collect souls to bring back. They redistribute them in The Here as the souls of all material things in this world (people, animals, plants, rocks, toys, crisp packets…) dropping them onto any vacant object. It’s down to chance as to which object will be dropped upon; The Carriers deliver fate, not decide it. These dropped souls are known as ‘Culver Drops’

The Carriers share the bridge with NIKOLA, the guardian of the bridge. Nikola is very attached to the bird-gods, who he considers his most sincere friends and cares for them if they are sick or wounded.  He brings them coconuts as gifts for their hard work distributing spirits to all the material objects. 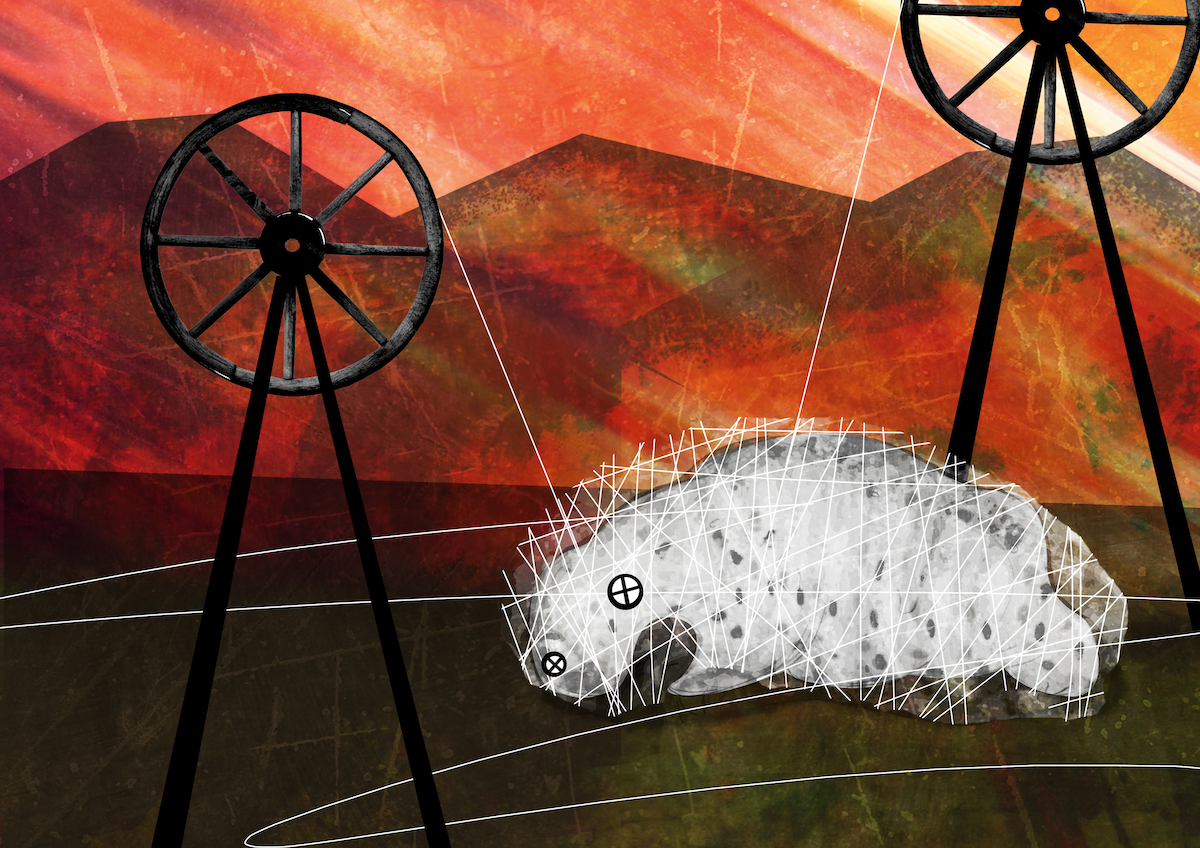 A mysterious Holy Man from the East risked his life to smuggle mulberry seeds into the wasteland, which grew overnight into tall, strong trees. From the mulberry trees the silkworm known as THE BOMBYX appeared, growing bigger and bigger until he was a giant.

Before the trees and the Bombyx arrived the land was scorched red by the sun and nothing could grow there. The tribes in the area were desperate; their land was ravaged, their recent conquerors had abandoned them, leaving them to fight amongst themselves without enough food, means of trading or rules to live by. They performed rituals and rites to try and better their luck. And then the mysterious mulberry monk man appeared, bringing the rains with him from the East.

The mulberry trees grew; provided roots and shelter for other plants to grow, and soon the wasteland was a great forest stretching far and wide. The people named this new oasis Arden and gave thanks for being delivered from their fate.

The Bombyx began to produce silk which he gave as a gift to the tribespeople, who wove it into fine garments which brought them great wealth. They repaid him by preserving mulberry leaves through the summer for him to eat through the winter. Eventually the tribespeople asked for more and more silk as their fortunes grew, and the Bombyx tried his best to keep up with the ever increasing demand, but he could only make so much.

His friends the Luddites saw his suffering and tried to sabotage the now city’s silk-weaving tools, but were overcome and banished from the land forever. Overworked and exhausted, the poor Bombyx, who had dutifully produced as much silk as he could, gave so much of himself that all that was left of him was a dry husk.

Outraged by what they had done, a descendant of the holy man cursed the land to become dry and barren once more, with the red soil from their fallen fruit being the last reminder of the mulberry trees that once stretched as far as the eye could see. 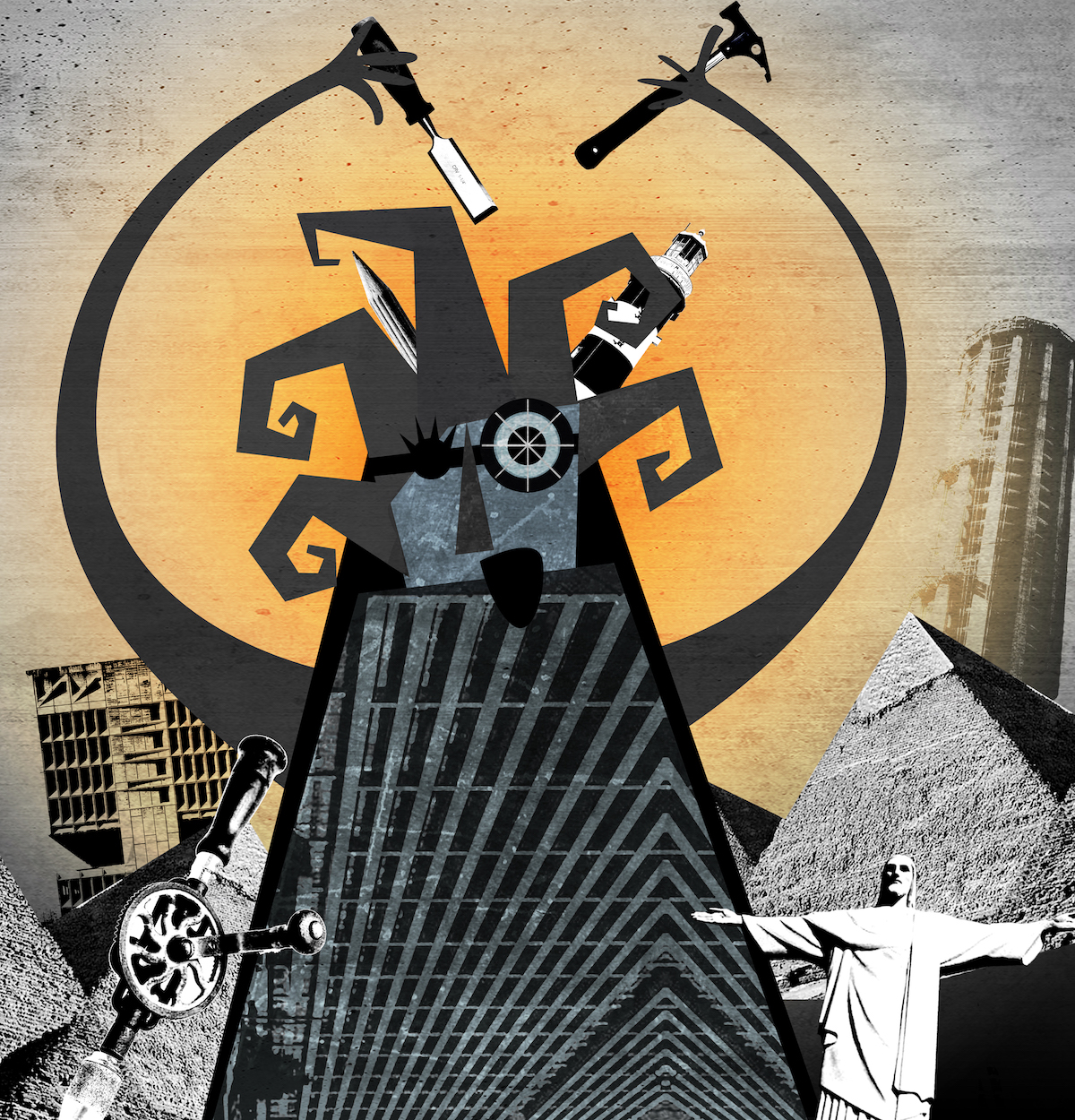 OOILITH is an immortal warrior/builder goddess who has mastery over concrete. She has chosen to help mankind construct wonderful buildings and particularly lends a hand rebuilding after disasters (for example, the bombings of Coventry and Birmingham).

Ooilith is an artist at heart and when she isn’t busy rebuilding damaged places, she enjoys making concrete sculptures. You can see her works all around the world. She wishes she had more time for her art. Like all artists, her style has changed over time.

Here are some of the buildings she has fashioned down the centuries:

27 BC The Pantheon, Rome 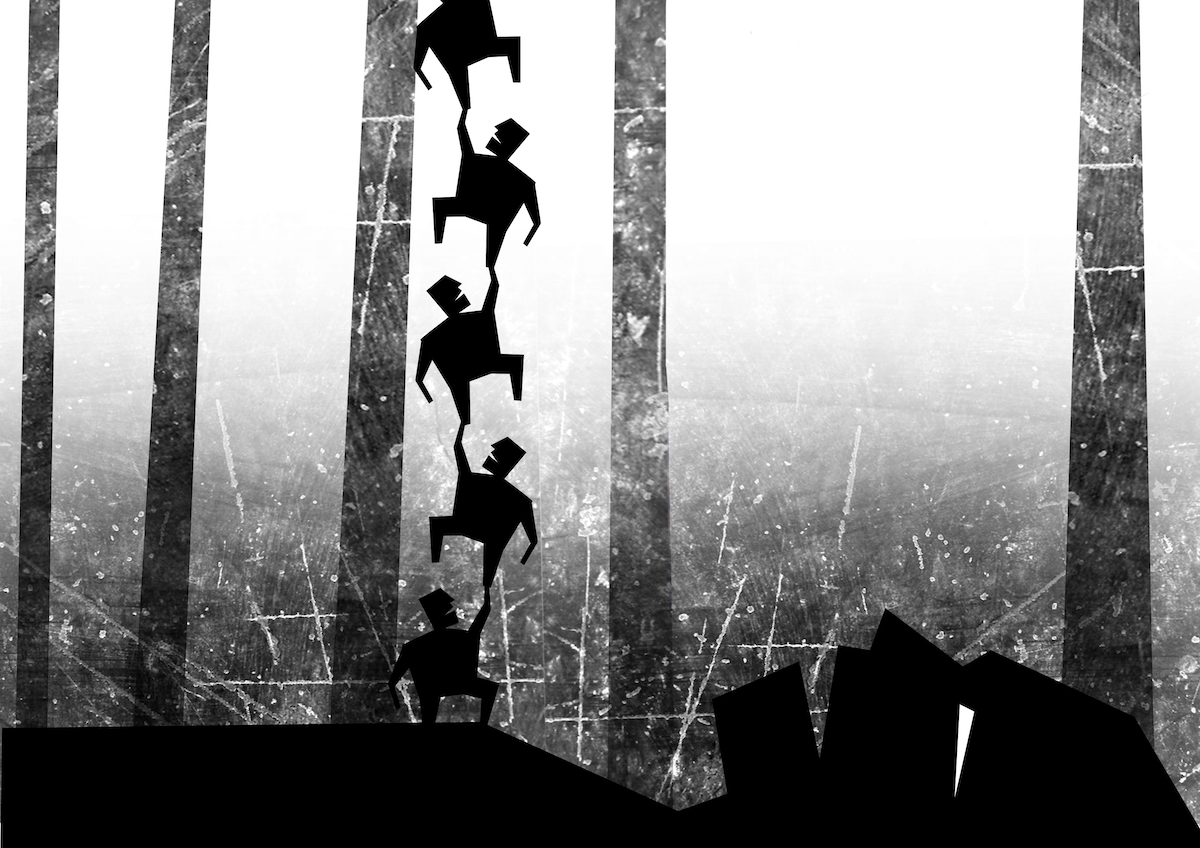 The AILM trees grow at the very centre of the earth. They have long and tangled roots, but above ground grew straight up without branches for miles into the sky, and are used to mark the burial place of great warriors. No mortal could find a grip on the soft, smooth bark, only the souls of the warriors buried there could climb to the heavenly realm.

ORAN is the brother of NIKOLA and is keeper of the Ailm trees. He shows mortals many things through visions but cannot directly intervene in human affairs. Oran is a keen musician, making instruments out of anything he can find, and loves to show the humans how to make their own. You would often find hoards of people playing with him by the waterside.

Oran’s job is to watch the forest and make sure that no souls try to climb up who should not. One day whilst Oran was asleep, several mortals, curious to see what wonders lay above, made their way up the trees by standing on each others’ shoulders and broke into the heavenly realm. Enraged at the arrogance of the mortals, the gods rained down explosions on the mortal realm as punishment, razing the peoples’ cathedral to the ground.

Seeing her people suffer, OOILITH petrified the forest and its canopy into concrete, permanently sealing off the two realms as both punishment and protection.  Ooilith then set to work helping the people rebuild what was destroyed. The concrete canopy became a trade road for the humans’ ever expanding silk trade and the rumble of traffic drowned out the shouts of the angry gods above, distorting the music left there by Oran.

Get eXclusive info About ion

We promise we will not spam you!

We use cookies on our website to give you the most relevant experience by remembering your preferences and repeat visits. By clicking “Accept”, you consent to the use of ALL the cookies.
Cookie settingsACCEPT
Manage consent

This website uses cookies to improve your experience while you navigate through the website. Out of these, the cookies that are categorized as necessary are stored on your browser as they are essential for the working of basic functionalities of the website. We also use third-party cookies that help us analyze and understand how you use this website. These cookies will be stored in your browser only with your consent. You also have the option to opt-out of these cookies. But opting out of some of these cookies may affect your browsing experience.
Necessary Always Enabled
Necessary cookies are absolutely essential for the website to function properly. This category only includes cookies that ensures basic functionalities and security features of the website. These cookies do not store any personal information.
Non-necessary
Any cookies that may not be particularly necessary for the website to function and is used specifically to collect user personal data via analytics, ads, other embedded contents are termed as non-necessary cookies. It is mandatory to procure user consent prior to running these cookies on your website.
SAVE & ACCEPT
Go to Top